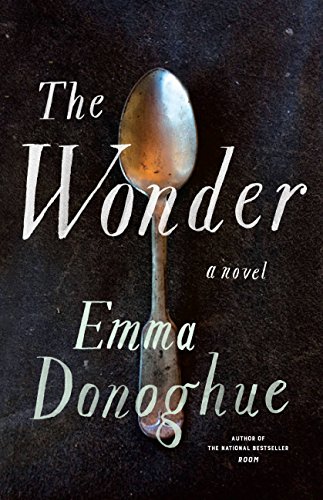 Lib Wright, a nurse who trained under Florence Nightingale, has been hired to stand watch over a young girl named Anna. Anna O’Donnell has been fasting for months and is seemingly healthy. The whole Irish countryside is astounded by it all, coming in pilgrimage to see the blessed girl. Lib knows that she cannot have just been sustained by the “manna from heaven” that she claims. Along with a nun, Lib watches and takes notes. She becomes taken by this little girl against all her best tries not to but she is determined to prove that something is not right. If she was so healthy before the watch, why is she getting weaker now? The family is so devout, so religious, they seem to be letting it happen, making Anna some kind of martyr. With the help of a reporter, can she save Anna in time?

This is a very slow moving read. You get to know Lib and Anna so well throughout the pages. Lib is so serious and so leery of what’s going on and Anna is so devout, so sacrificing. When you find out why, it is a big wow moment. Heartbreakingly wow. I wanted to shake some people, they were frustrating! But ultimately I think it was about faith. Anna had her faith in her God. Lib had faith in her medical training and her intuition. Faith carried them through because they ultimately had faith in each other. This had that same claustrophobic feel as Room. The house and rooms were so small. It lent a real anxious feeling to the story. It did move a bit too slow at times but you will be swept up in the rush to save Anna and you won’t be sorry when you get to the epilogue.