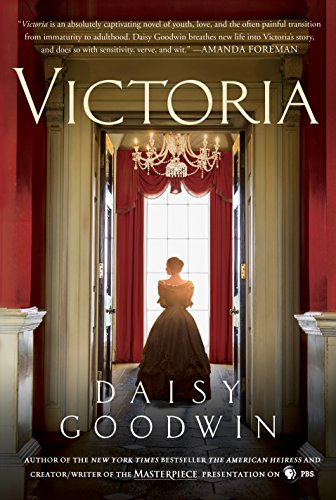 Alexandrina Victoria is a mere 18 years old when her uncle dies and she becomes queen of England. Her youth is very apparent in the way she handles some of the things thrown her way. She has been very sheltered by her mother and her mother’s consort, who has plans of his own. She has even slept in the same room with her mother her whole life. She can’t even walk down the stars without holding the hand of her governess. Things are definitely going to change! She chooses to be called Queen Victoria and with the help of her chosen Prime Minister, Lord Melbourne, she starts to come into her own. He is much older than her and her feelings for him become something deeper, much to the chagrin of everyone around her. The story takes us through the beginnings of her reign and up to her engagement to her cousin Albert.

This is going to be a series on Masterpiece this coming year and I look forward to seeing the opulence of it all. It is described beautifully in the book.There is quite a lot that  I didn’t know about Queen Victoria and that was interesting. I just felt that is seemed so simply written. I almost felt at times that I was reading from a history book at school, minus the romance. It felt like a script for the show, almost as if I were reading the directions. I think that if you follow the royals, this would be for you. I will watch the show and at least be a little more in the know of what happens.

I received a copy of this book from St. Martin’s Press in exchange for an honest review.