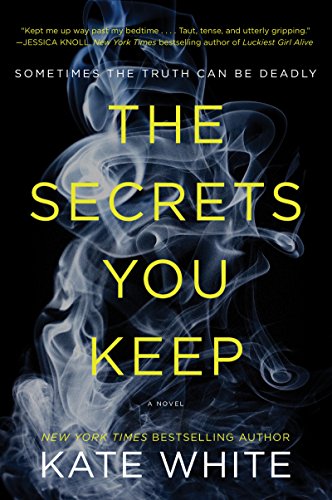 Bryn Harper, an author of a self-help book, is in dire need of help for herself. She was in a car accident that killed the driver and she really has no recall of what happened. All she remembers is he was at a book event in Boston and offered her a ride home the next day. She wakes from dreams of being in a hotel room that’s on fire and there is a man with her but can’t seem to place him or why she keeps having the dream. She has moved from New York to the town of Sarasota Springs to live with her husband of two years, Guy. He works as a fundraiser for the local opera company and they have been having a long distance marriage up until now. Bryn is trying hard to find her footing and write her next book but she can’t seem to get out of the funk she is in. When Guy tells her that he wants to have a dinner party for some benefactors, she agrees hoping it will maybe help. But this dinner party only starts the wheels in motion of everything that happens later. She gets a strange vibe from the caterer and later, she finds money missing and a strange memento in her desk. When she confronts the caterer Eve, she tells her that maybe she should talk to her husband. Okay…..She gets a call from someone at the caterer’s that she should come and see her so she does and finds her dead. Yikes! The police seem to think she had an ax to grind( ha ha) with Eve and Bryn begins to realize things are not what they seem with her husband. What else will she find out?

Kate White has done it again! You think you know who the killer is but she has a way of throwing red herrings at you that make you look another way. (Even if I was saying “don’t trust your husband” a lot!) Bryn is a wonderfully written, strong character who didn’t back down, even if she had self-doubt. If you haven’t read Kate White before, and why haven’t you, this would be a good first book to start with. Then you could pick up her other books and you won’t be disapppointed.

I received a copy of this book from Edelweiss and Harper Books in exchange for an honest review.