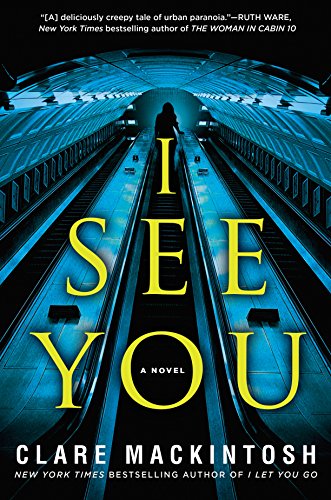 Zoe Walker rides the train to and from work everyday. As she is riding one day, she is looking at the paper and sees an advertisement with her picture on it. At least she thinks it’s her. It is for one of those dating websites. Her boyfriend and kids don’t think it’s her. The next day, she sees another woman’s face on the ad. The next day, another woman….Maybe it’s some weird fluke until things start happening to the women in the ads. Is she next? She begins getting paranoid about everyone around her on the train, on the street, in her home. Her daughter is starting a play that she got cast in rather strangely. Is someone after her? Her boyfriend is acting strange. Her son seems okay. He is working at her best friend Melissa’s cafe but he is awfully quiet too. She involves Kelly, a police officer with her own demons, who finds herself totally absorbed into what’s happening with these ladies. Will they figure out who’s behind it all in time to save Zoe?

Okay. That ending! I was not expecting that at all. There were times that I was feeling that the story was dragging a bit. Her first book, I Let You Go, did a better job of keeping me enthralled throughout but this was a solid second effort. That ending though! It does have an interesting concept with the “dating” site and what that means. It is not a stretch to believe that it could really happen. But that ending! Do not read ahead to the ending on this one because it will ruin the whole story for you.

I received a copy of this book from Netgalley and Berkley Publishing in exchange for an honest review.