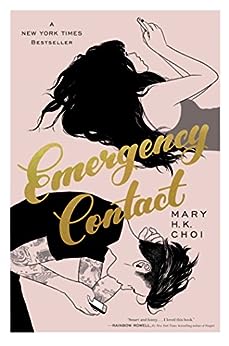 Penny Lee heads off to college and leaves behind a lot of things that she just could not relate to or even like. Her mother is a MILF and that drives her crazy. She has a boyfriend that is the polar opposite of her, that would probably thrill any other girl in their high school, but not Penny. Penny is different. When she meets her roommate’s “uncle” Sam at the coffee shop, there is something that draws her to him. Maybe it’s his curly hair or all his tattoos. She happens to be on the scene when he suffers from a panic attack (he is sure it is a heart attack) and helps him through it. She becomes his emergency contact. That starts a string of text messages that evolve throughout the story.

Sam is dealing with his on/off girlfriend. They go through a few things which you will have to read to find out about but he finds himself wanting to talk to Penny more than anyone. The texts become phone calls and then evolve into much more. Will they realize what it is they both really want?

I have read a few books that were told in texts or emails but what I really loved about this one is that it wasn’t only that. The texts were like the icing on the cake because we learned so much about them throughout the whole book, not just in their messages. They were the cutest couple and if you do not root for them to get together, I wonder if you even have a soul. I admit I almost cheered when Penny’s facade started to crack a little. I admit I cried when she would open up to other people, her fear was so palpable. This is just such a lovely book and I am so glad that I saw someone on one of my online book groups rave about it.