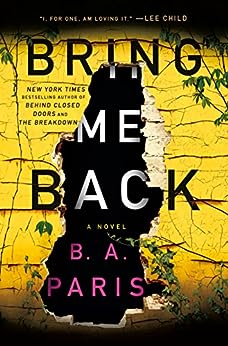 B.A. Paris has a wonderful way around a mystery/thriller. I enjoyed her last two books and this one slid easily with the others.

Finn’s girlfriend Layla disappeared one night from a rest stop. The details are sketchy because Finn has not told the police the whole truth, which you will find out as you read. Years later, Finn is engaged to Layla’s sister Ellen. Ellen is the polar opposite of Layla but Finn has found a somewhat peaceful life until….(cue the dramatic music) a little Russian nesting doll appears and then emails from Layla appear. Now, if only Layla will appear….

I really enjoyed the back and forth between Finn and Layla’s emails. It was such a cat and mouse game. I have to admit though that I felt it started to drag in a few places and I was wanting to fast forward to what happened after. But I didn’t and the ending was worth the price of admission. It is one you will not see coming.

I look forward to whatever she writes next!

Thanks to St. Martin’s Press for letting me read this book early.