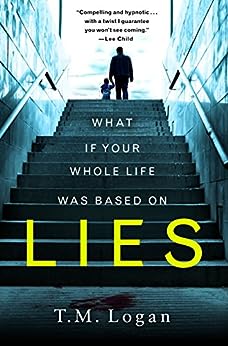 Joe Lynch happens upon his wife’s car while with his young son. He follows her into a hotel parking lot and finds her arguing with a friend. He has no idea why she would be arguing with Ben and something niggles at him about the situation. When she leaves and he confronts Ben, Ben tells Joe that Joe has no idea what’s really going on. He goes to punch Joe. Joe pushes him away, not wanting to hit someone not quite up to his size, Ben falls and hits his head. Joe’s son is in the midst of an asthma attack so Joe runs home and when he goes back, Ben is gone. He asks his wife what’s going on and she tells him she was just helping Ben out with a client but as the story unfolds, and Joe is implicated in Ben’s disappearance, there is lie upon lie upon lie.

I did not see the biggest lie reveal at all. I thought I knew what was happening and was pretty proud of myself but I was wrong. There were some parts that really dragged for me and I wanted them to move a little quicker but all in all, it is a good thriller with a very likable lead character.

Thanks to Netgalley and St. Martin’s Press for a copy of this book.