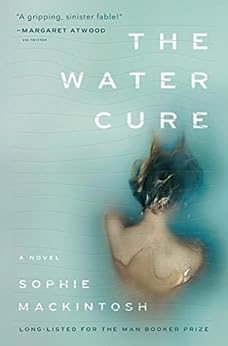 Grace, Lia and Sky are raised on an island away from a world where men can hurt them. They live with their parents, parents who run them through a daily bunch of tests and actions to make them safe from whatever these men in the world can hurt them with. They are taught that just breathing the air from where the men are can kill them. Other women come to this island to be cured. No one else stays.

One day, King, their father, is gone. Their mother says he is dead and they begin a different kind of life. Their mother still adheres to all the old rules. Our story is told by Grace and Lia. Grace is pregnant. Yes, you read that right. That makes your brain go one hundred miles an hour. Lia is struggling with emotions. They aren’t supposed to feel them. Until the one day, two men and a boy wash up on their little utopia….

This has such a hazy, atmospheric quality to it. I felt the bones of the big old house they lived in. I felt their breaths as they played the drowning game. I felt the cuts Lia inflicted on herself. It is really harsh. Their mother was tough. It was hard to sympathize with her. There were truths that were revealed and I just was shocked. It is hard to put this book in any box . I have not read anything like it. The writing is superb.  I think I will think about this one for a long time.

Thanks to Netgalley and Penguin for an advance copy of this book.