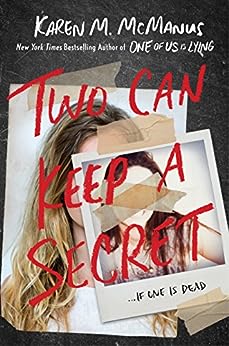 “There’s not easy way of knowing, which direction we are going….”

Remember that crazy boat ride in Willy Wonka? Things were spinning and there were strange images popping up. As you looked at each one, you were wondering where were we going with it all and what a ride! That is this book. I loved it!

Ellery and Ezra arrive at a hometown that they have never known. Their actress mother grew up there. She was homecoming queen and in this town, that is not a good town.  She is in a drug rehab and they are going to live with their grandmother. A murder of the homecoming queen years earlier seems to be repeating itself when weird images and things start popping up around town, warning that it could happen again. Ellery is somewhat of a murder nut and she starts to put clues together. This also includes clues about her own mother’s twin sister who disappeared years ago, the night of homecoming. After a weird exchange with a fellow student, Brooke, she goes missing.  Cue the dah dah daaahhhhh music.

I had no idea where this wonderful ride was going to end up. It could have been in the horribly named Murder Land. I mean, really, would you go to a theme park named Murder Land? They do rename it to Fright Farm but being the wuss I am, still a big no. Whodunit? Whydunit? You will not be disappointed and you will tear through the pages of this book.

If you have not yet read Karen’s book One of Us is Lying, pick it up, you slacker! You will not be disappointed in either of these books. In fact, you will thank me. You are welcome.